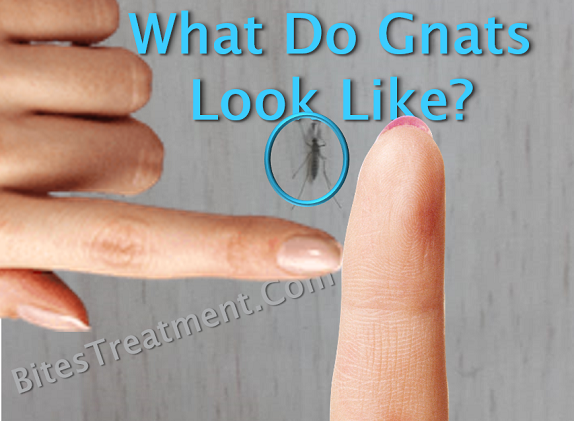 In a brief, Adult gnats are tiny flies that seen on the horizon prior to dawn and dusk and look like dust or clouds or rain, the size of full-grown adult gnats is 6.35 mm (1/4 inch), gnat body is long and slender with thin wings, some gnats have humpbacks, some gnats body have hairs and others have not, body colors include black or dark-brown in common, grey, yellow and green. No-See-Ums and Midges are other common names of gnats.

Now come to details, below is the first full guide for identification of biting gnats and non-biting gnats, how to know the difference and take your precautions.

Actual Size of a Gnat

Images of the real and actual size of gnats as showing how long is a gnat in the real world which make you wonder how much pain caused by such a very tiny bug like a gnat.

From the best illustrations that focus the gnat fly size I found this picture:

Gnats Vs Mosquitoes Vs Housefly Vs A stink bug

The colors and Body shape differs slightly from species to another, in the later sections of this guide, a full explanation of the specs and details of each gnat type.

Gnats are generally classified into two categories, the biting gnats or biting midges, and the non-biting gnats

Those the gnats you must be aware of them and should avoid their areas.

The species of Gnats that Can Bite

Mainly there is two biological insect families that consists of that tiny biting gnats, Ceratopogonidae and Psychodidae.

However, people around the world hate the biting flies and name them many different names, the common colloquial name is Sandflies or Black flies,

they may be of horse flies from the family Tabanidae as in US, also Florida people call it punky or sand gnat or sandflea, or may be of genus Austrosimulium in australia and call it the blackfly, Also insects from subfamily Phlebotominae and Biting midges (Ceratopogonidae) are known as sandflies or no-see-ums.

In the Caribbean, there is locations notorious of sandfly invasions such as Belize and Honduras

Biting Gnats are vectors of many diseases such as sandfly fever, common treatment is bug sprays containing high concentration of DEET.

Also known as biting midges and sand flies, they’re found everywhere around the world, attracted to human blood to enrich their eggs and growth otherwise they feed on nectar and prey on other insects.

Noseeum name is because you can’t see them, or hardly seen, noseeum size is 1–3 mm, color is black, short wings, and long legs.

Both are from the same family “Psychodidae” and their bites can transmit many of sand fly-borne diseases. feed on blood from humans, cats, dogs, poultry, and horses, and some pigs. Sandflies from species of Phlebotominae and Lutzomyia are about 3 mm in length with hairy yellowish back; hairy body and short wings

Other Types of ceratopogonidae midges

Fungus Gnats are insects from the super-family “Sciaroidea” which consists of more than 16 subfamilies that looks a bit different from one to another. Fungus gnats are pests of crops, household plants pots and pests of mushroom farms but don’t bite human or pets.

Fungus gnats are very tiny that you can hardly identify however, they may be seen in swarms like clouds, also they’re lazy flyers.

Most of fungus gnats are 1 to 7 mm long, slender dark colored body and wings, many females of fungus gnat types are wingless, typical long legs and antennae in most of them.

The below galleries show you how to identify each insect of the fungus gnat families.

Fungus Gnats of the Family Cecidomyiidae

Fungus Gnats of the Family Keroplatidae

Fungus Gnats of the Family Lygistorrhinidae

The most seen dark-winged fungus gnats

Also know by other names such as chironomids or non-biting midges, lake flies resembles mosquitoes but they don’t have wing scales and elongated mouth-parts like mosquitos, so that people may call it the blind mosquitoes, lake flies superficially looks like sandflies but don’t bite humans. Identify from the images below,

The gnats of the family Chloropidae, also have other names including frit flies or grass flies, eye gnat size is minute (1-4mm), eye gnats body looks shiny with many colors including gray, yellow, green, black, or having golden strips, they posses short and soft proboscis (sucking mouthpart) and shortened reduced wings.

Eye gnats are pests of cereals and grasses but don’t bite humans, although they can feed and attracted to fluid secretions from eyes and body fluids of humans and animals, that’s why people call it eye fly.