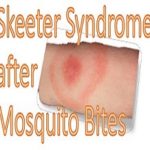 Mosquito bites are very annoying, and skeeter syndrome is a worse sign. The good news, skeeter syndrome doesn’t develop a serious threat for the rest of your family. It’s not being safe by only some prevention and repelling spray.

A mosquito bite can turn into a very big bump accompanied by high body temperature, this condition has a medical term “Skeeter Syndrome”

It’s a kind of localized allergic reactions to mosquitoes bites on skin, that leave very itchy red bumps followed by medium to large fluid-filled blisters. which are the common signs along with occasional fever. SK main reason is the allergenic polypeptides in mosquito saliva, it means you can’t get infectious from a person skeeter syndrome.

Skeeter’s Syndrome looks like convexity that appear after mosquitoes use parts of their mouth to prick your skin and feed on the blood. Most mosquito bites do not cause harm (only a small itchy red bump), but sometimes leave a large swollen, ulcerated area with redness. This type of allergies – the most common in children – is sometimes referred to as “Skeeter’s syndrome”.

Skeeter syndrome is common among: Children, toddlers, seniors, and any human or animal with weekend immunity.

Some people affected while some people doesn’t show any effect, It is a fact in any allergic disease.

What is Skeeter Syndrome in medicine?

Skeeter syndrome is a sort of human body allergic reactions against mosquito bites.

Other names: papular urticaria is the same as Skeeter Syndrome.

Skeeter syndrome is caused by allergenic polypeptides that spit off with mosquito saliva during siphoning human blood,

Skeeter syndrome is not contagious because it’s only the bitten person who get the mosquito saliva, saliva is consisting of only proteins that’s the body hate so much, saliva contains parasites and bacteria can cause additional second infection and therefore, cause the body to be infectious and contagious.

The good news is that the allergic effects of skeeter syndrome not as dangerous as allergies to stings from bees and wasps.

As some people attract mosquitoes more than others, also they can react more seriously to mosquito bites when they get bitten, and here some signs and symptoms that show up after mosquito skeeter syndrome.

The main difference is the effect time, as the skeeter syndrome takes 1-3 hours to show up, while infection to skin may appear after few days.

Other than that, both may come after a bug bite.

However, Skeeter syndrome can develop into blisters and abscess if you scratch the bite and make an opened wound. So that any mosquito bite that develop a fever and larger reddish bump, it’s an infection and need urgent care.

Which Mosquitoes do cause Skeeter’s Syndrome?

Off course, all types of mosquito that bite can cause skeeter syndrome, especially for younger individuals.

However, some other insects can develop skeeter syndrome effect after they bites your skin.

Yes, Skeeter syndrome can affect adults as well, but it is less common. An allergist (doctor of allergy) can perform a skin test to identify skeeter syndrome, however IgG and IgM blood tests can help distinguish SK from other inflammatory conditions to skin

As the symptoms can be so unpleasant and uncomfortable, we can suggest a few over-the-counter remedies that can help alleviate the itchiness after a mosquito bites

How do doctors treat skeeter syndrome?

Cetirizine is a second generation Anti-histamine that can treat allergy symptoms, hives, and itching by many reasons.

Cetirizine is available as nonprescription ointment (OTC), but sometimes a prescription by a doctor may be needed, It has no known risks during pregnancy, but has very serious interactions with alcohol, so avoid taking antihistamine for mosquito bites while you’re drinking alcohols.

When to speak with doctor about skeeter syndrome?

It’s better to consult a doctor once you feel sever allergic reaction with fever that prolong more than a day, The doctor will be able to examine your bitten skin, evaluate symptoms, and put you on a personalized plan-of-action if there’s a more aggressive case of skeeter syndrome.

Skeeter syndrome may start to develop within 1 to 3 hours after the mosquito bites your skin.

This is How long does it take for skeeter syndrome to go away?
The itching sensation will fade a few days after mosquito bites, and the bitten skin will gradually takes the pink hue until it returns to its normal appearance. mild mosquito bite swelling will also go down after about 3 days and less than a week.

Because bitten people rarely seek treatment for such unknown condition, and therefore the treatment time may extended.