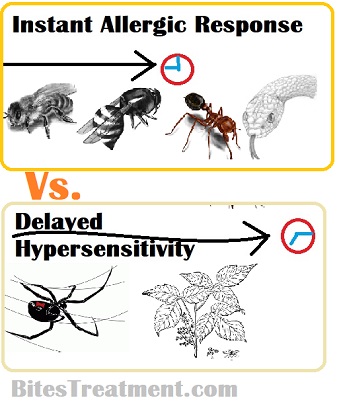 Many questions come everyday on the page’s messages include:

To answer well, we need to understand what is the reaction being occur after biting, i.e. “the allergic reaction” or “Hypersensitivity.

As you may know, when a bug bit your skin they intentionally or accidently inject their salivary chemical into bloodstream, therefore, our immune system declare the defensive situation and starts to secrete anti-histamines and other chemicals to neutralize and to stop the bug-salivary-chemicals, and that was how allergic reaction occur after getting bit?

Onset time: rapid, mild at first but worsen rapidly in an average of 20 minutes, starts few seconds to few minutes after biting, which can lead to serious symptoms and even death. That was how rapid is anaphylactic reaction and immediate allergic reaction?

Symptoms: include a runny nose or a skin rash at first, itchy rash, but within 30 minutes there is one or more of these serious symptoms: Coughing; wheezing; tightness in your chest; throat swelling, tongue swelling, shortness of breath, vomiting, imbalance effect, as a result the blood pressure decreased. That was What do anaphylactic reactions look like?

Bites that cause immediate hypersensitivity and anaphylaxis

Snake bites and stings from bees, wasps, and fire ants are commonly cause what doctors call “anaphylactic shock”.

What causes the delay in delayed hypersensitivity?

It usually takes 48-72 hours to fully develop however, it may take several days to show up unlike the other types.

The reason behind delay is the primary local inflammatory response at the site of bite after exposure which takes time to induce cells to accumulate at the tissue site, therefore swelling increase and widen.

Some bites takes too much time before showing an allergic response, for instance, if you got bullseye spider bite it starts as little sting then forming a blister surrounded by a red ring or the center of the bite turns blue or purple, and it takes too much hours of pain while undergoing these developments, then it takes up to 10 days to widen or develop large open sore.

When to worry about after a bite?

The time of concern
It’s the period of time where signs go severe and dangerous.
Seek emergency medical treatment right away and Call 911 if you experience any of these symptoms :

Pain around the bite that is getting worse, spreading redness over time, fluid coming from the bite, rapid swelling of the lips, tongue, throat, or puffiness around the eyes.

To help identify the cause of allergic reaction well, take with you any remnant, such as stinger, fluid came from the bite, the insect even it was dead.

And there’re few information in order to well-understand the immune reactions.

Biting Time:
According to the American Academy of Allergy, Asthma, & Immunology (AAAAI), For a mosquito, the contact time with skin must be at least six seconds to produce allergic reaction that a human can feel.
From this, we deduce that if the mosquito landed on the skin and flew quickly, the person may feel the stinging, but the effect of an immune reaction does not occur, because the biting time is not sufficient, the other possibilities include, you got little saliva from mosquito which trigger little allergic effect.

Reaction Time
Allergic reaction of a mosquito bite starts by showing a firm, dark red bump, the time between the bite and appearing these signs of allergy can be few seconds or may be delayed to appear the next day, it does mean a person may get mosquito bites and didn’t see any bite marks up to the next 48 hours after the initial bite and that’s why do some people have a delayed reaction to mosquito bites.
Thus, Skeeter syndrome swelling for many mosquito sensitive individuals has delayed up to four or six hours but may persist for several days.

But, bites on the face especially on eyelids can swell more and show immediate allergic reaction manifestations, i.e swelling, redness, and itchiness.

Persist Time or Lasting time
The question here is, how long do the bites lasts?
Most of mosquito bites show allergic signs (i.e. swelling and itch) for up to 4 days followed by signs of skipping allergy (i.e. pinkness or pale redness) which lasts another 4 days. The swelling may last 7 days. Bites of the face or around the eye can persist with severe swelling for few weeks.

The Time is a factor in well-identification of many bug and animal bites.

You got know the comparison between Immediate hypersensitivity allergic response vs delayed reactions, and how it does differ from location to another means on bites eyelid it well be faster allergic reaction than bites on other skin spots, what insects or creatures show instant allergic reaction at once and what other show delayed reactions.
Also, Normal Reaction Time, is It same for every creature or varies, of-course it varies due to different immunity.
Insect bites that don’t exhibit allergic reactions for days
The answer to “Can a mosquito bite shows after days?”

The question urges for many of us, can insect bites last for months? but this is another topic, follow us.